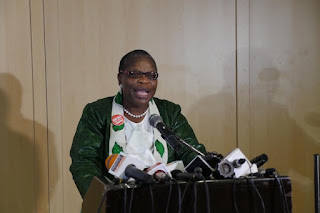 The Ex-Presidential Candidate of the Allied Congress Party of Nigeria, ACPN, Oby Ezekwesili has officially announced her resignation  from the party and has returned its membership card and all other party items.
News Men sourced that she disclosed this at a World Press Conference organized by today. She stated that she made this move because the party was more focused on Money than Votes.
Ezekwesili made fame a few weeks ago when she publicly established her withdrawal from the Presidential Race. Her party quickly dissociated itself from her and stating support for the Presidential Candidate of the All Progressives Congress, APC, Muhammadu Buhari.
admin February 06, 2019
Next article Next Post
Previous article Previous Post
Click to comment
‹ Newer Post Older Post › Home
Subscribe to: Post Comments (Atom)