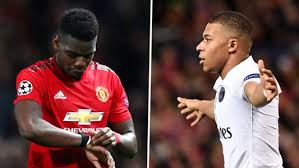 Paul Pogba will miss the second leg of Manchester United's Champions League tie against Paris Saint-Germain in the wake of being appeared red card in the end phases of their experience at Old Trafford on Tuesday night.

With the clock ticking down, Pogba scratched his studs down the side of Dani Alves' leg and was appeared second yellow card, having gotten the first in the 23rd moment when he rattled Marco Veratti.

Joined lost the amusement 2-0 after second-half objectives by Presnel Kimpembe and Kylian Mbappe removed the diversion from the hosts, conveying the main annihilation of Ole Gunnar Solskjaer's rule.