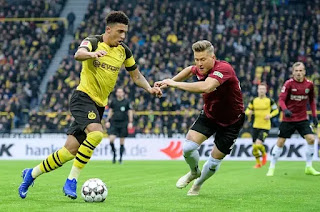 Manchester United are "keeping tabs" on Borussia Dortmund's Jadon Sancho with a perspective of marking him in the late spring, as per reports.

The 18-year-old joined the Bundesliga side from Manchester City in 2017 subsequent to turning down a £30,000 seven days arrangement to remain at the Etihad.