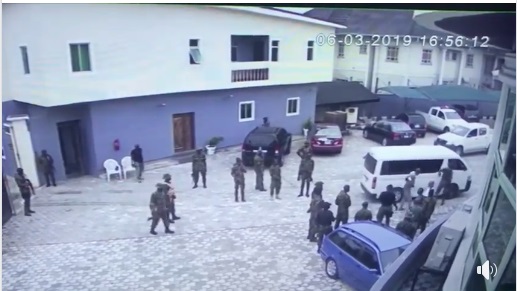 The soldiers invaded the commissioner's house
CCTV videos have emerged showing the moment soldiers invaded the residence of the Rivers State Commissioner of Education, Hon. Dr. Tamunosisi Gogo-Jaja.
The commissioner and his family members were reportedly arrested by the Nigerian Army 6 Division, Port-Harcourt.
According to reports, they were whisked away by a fleet of fierce looking soldiers who stormed his GRA Phase 3 residence by about 2 pm Wednesday, March 6, 2019.