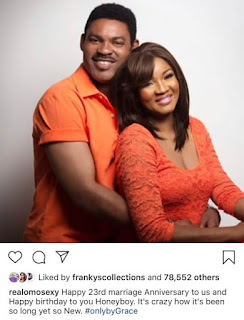 Super Star Nollywood actress, Omotola Jalade celebrates her 23rd wedding anniversary with her husband, Captain Matthew Ekehinde who also added another a year.Omotola who made this announcement through her Instagram page, then posted a photo of them in a matching red outfits, and captioned the photo saying :‘‘Happy 23rd marriage Anniversary to us and Happy birthday to you Honey boy. It’s crazy how it’s been so long yet so New. #onlybyGrace”Omotola and Mattew Ekeinde got married in 1996 but decided to have the most talked about and a befitting  wedding in 2001 with a number of friends and family on a boarded Dash 7 aircraft flying from Lagos to Benin.The wedding was seen as one of the biggest and most talked about at that time. It even got more buzzy because they got married on a  boarded flight. 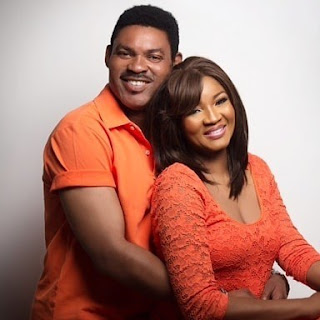