#NigeriaDecides: 29 Governors & 991 Legislators to be Elected 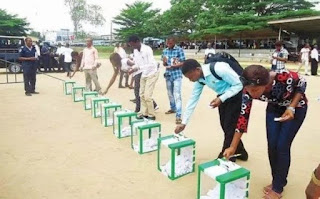 Amidst pressure to buck the tide of a bandwagon, voters across the country go to the polls today to elect 29 governors and 991 members of the State Houses of Assembly in all 36 states of the country.
Coming two weeks after the presidential election won by the All Progressives Congress, APC, the momentum on the part of the ruling party is nevertheless being vigorously challenged by the main opposition party, Peoples Democratic Party, PDP in its strongholds.
The political contest is especially fierce in the South-South, Southeast and Middle-Belt strongholds of the PDP.
Ahead of today’s election, the Independent National Electoral Commission, INEC has promised stronger application of the rules with the proclamation that votes generated outside the use of the card reader would be rejected.
Speaking yesterday ahead of today’s poll, Mr. Auwal Musa Rafsanjani, head of Transparency International in Nigeria expressed hope that INEC, the election management body would rise to the challenge and ensure that the problems that dogged the presidential and National Assembly elections two weeks ago are checked.
“My expectation is that INEC should be more prepared and able to conduct the elections without logistics problems. We are supposed to learn from the past issues, we are hoping that INEC should be able to organize this election without failure,” Rafsanjani who is also executive director of the Civil Society Advocacy and Legislative Centre, CISLAC said.
“Secondly we are expecting that security should identify red flag points and deploy to such areas without bias,” he further said.
Elections will also go on in Abuja today to produce council chairmen and councilors in the six area councils.
Source:
https://www.vanguardngr.com/2019/03/nigerians-elect-29-governors-991-state-legislators-today/
admin March 08, 2019
Next article Next Post
Previous article Previous Post
Click to comment
‹ Newer Post Older Post › Home
Subscribe to: Post Comments (Atom)