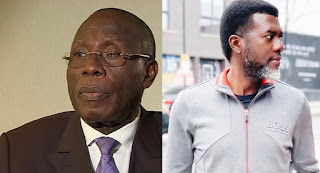 He wrote:
"How President @MBuhari’s minister of agriculture can expect us to believe Nigerians now order pizza from London, beats me. Dont forget this is the same man who wanted to import grass from Brazil for Nigerian cows. Why are we cursed with such comedians as leaders? There are multiple pizzerias along Banex Plaza in Abuja and a series of them in the Falomo area of Ikoyi. However, this agriculture minister who read French, wants us to believe our people prefer to import pizza from London! Square pegs in a round holes "
admin March 27, 2019
Next article Next Post
Previous article Previous Post
Click to comment
‹ Newer Post Older Post › Home
Subscribe to: Post Comments (Atom)