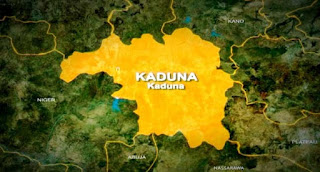 The Kaduna state government has announced the imposition of a 24-hour curfew on Kajuru local government area of the state.
The curfew comes on heels of a rumour that a fresh crisis is imminent in Kasuwan Magani community, one of the crisis-prone areas in the council.
A short statement issued by the spokesman for the Kaduna state government, Samuel Aruwan quotes the state Deputy Governor,  Bala Bantex as directing vigorous enforcement of the curfew and also urging citizens to comply and support peace efforts in the community.
Kajuru local government area has been in the news in the last two years for the wrong reasons, especially due to incessant conflicts that have claimed several lives and property worth millions of Naira.
Source:
https://nnu.ng/post/24-hr-Curfew-Imposed-On-Kajuru-By-Kaduna-State-Government
admin April 26, 2019
Next article Next Post
Previous article Previous Post
Click to comment
‹ Newer Post Older Post › Home
Subscribe to: Post Comments (Atom)