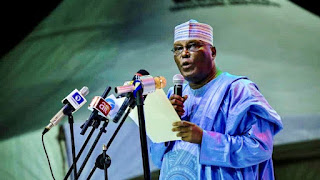 The presidential candidate of the Peoples Democratic Party (PDP), Atiku Abubakar, has dissociated himself from campaign poster that was seen in Abuja and its environs.
DAILY POST had reported sighting fresh posters of Atiku Abubakar in certain streets of Abuja.
The posters, which also bore ‘Pukka’ a Hindi word which literally means ‘Genuine’ emerged after a report on how Atiku allegedly enlisted the assistance of two cerebral lawyers in Washington DC, United States of America to lobby the American government for recognition as the winner of the last presidential election.
Many of the posters were seen in the Central Business District within the Abuja city center.
Atiku reacting in a statement by his Media Adviser, Paul Ibe, dissociated himself from the posters, adding that he is focused on retrieving his stolen mandate.
The statement reads: “Our attention has been drawn to posters of His Excellency Atiku Abubakar, Presidential candidate of Peoples Democratic Party in the 2019 election being circulated in Abuja.
“We disassociate the former Vice President of Nigeria from the said posters in circulation.
“The campaign season is over. The tainted electoral victory by the incumbent is being challenged in court.
“We refuse to be distracted, which is exactly the objective of our opponents but to remain focused on diligently pursuing our election petition with a view to retrieving the stolen mandate.”
Source:https://dailypost.ng/2019/04/10/atiku-reacts-fresh-posters-abuja/
admin April 10, 2019
Next article Next Post
Previous article Previous Post
Click to comment
‹ Newer Post Older Post › Home
Subscribe to: Post Comments (Atom)