BREAKING: 2 dead, 4 injured after shooting at University of North Carolina at Charlotte, US 🇺🇸* 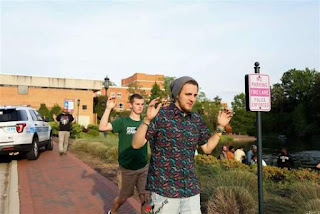 Two people are dead and at least four others were transported to hospitals after reports of a shooting at the University of North Carolina at Charlotte, US, on Tuesday, an _Emergency Medical Services Agency_ (EMS) official said.

There was no information as to whether the dead and wounded were students, Lester Oliva with the Mecklenburg EMS agency said.

NBC affiliate WCNC of Charlotte reported that a suspect is in custody, citing a medic supervisor.

The EMS agency tweeted that two of the injured have life-threatening injuries and two have injuries that are non-life-threatening. It was not clear if there are other victims.

The University of North Carolina Charlotte’s Office of Emergency Management tweeted shortly before 6 p.m. that "Shots reported near kennedy" and urging people to "Run, Hide, Fight. Secure yourself immediately."

The office later tweeted that the campus remained on lockdown while law enforcement sweep the buildings.

To read the full article - http://v.duta.us/3D8QOwAA