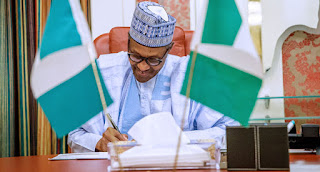 The Senior Special Assistant to the President on National Assembly Matters (Senate), Senator Ita Enang, disclosed this to State House correspondents on Thursday in Abuja, the nation’s capital.

According to him, the President expects that Nigerian workers and the Nigeria Labour Congress (NLC) will show more commitment to work.


President Muhammadu Buhari assents to the Minimum Wage Repeal and Re-Enactment Act, 2019 at the Aso Villa in Abuja on April 18, 2019.


On the importance of the Act, the presidential aide said, “This makes it compulsory for all employers of labour in Nigeria to pay to their workers the sum of N30,000.

“This excludes persons who are employing less than 25 workers, persons who work in a ship which sails out of jurisdiction and other persons who are in other kinds of regulated employment which are accepted by the Act.”

Senator Enang added, “It also gives workers the right if you are compelled by any circumstance to accept salary that is less than N30,000 to sue your employer to recover the balance.


Senator Ita Enang addressing reporters at the Presidential Villa in Abuja on April 18, 2019.


The government and the President’s Personal Assistant on New Media, Bashir Ahmad, also confirmed this in a tweet.

I signed the New National Minimum Wage Bill into Law today at the State House, eight years after the last review. I would like to express gratitude to everyone who contributed to this very important task, and reiterate our commitment to the welfare of all Nigerians.