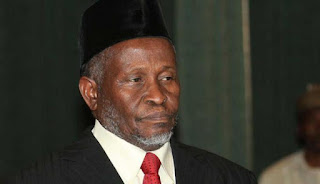 In the originating summon with suit No. FCT/HC/BW/CV/79/2019, filed before the court in April, the petitioner alleged that the CJN deliberately falsified his date of birth.
Michael alleged that the CJN falsified his date of birth from Dec. 31, 1950 as contained in all his official records, including that of WAEC to Dec. 31, 1953 upon his appointment as a judicial officer, NAN reports
The petitioner in the originating summon is appealing to the court to determine whether such act of the CJN does not constitute a criminal act of perjury, falsification and forgery.
Mr Michael in the summon also prayed the court to determine whether by falsifying his date of birth from Dec. 31, 1950 to Dec. 31, 1953 upon being appointed to Nigeria Bench as a judicial officer he has not breached the Constitution of the Federal Republic of Nigeria.
The petitioner is also praying the court to determine whether Justice Mohammed has not breached the Code of Conduct for judicial officers and consequently brought the image of Nigeria Judiciary to a state of disrepute and odium.
The petitioner in his reliefs is praying the court for a declaration that the defendant falsified his date of birth and that the defendant has desecrated the breach of the Constitution of the Federal Republic of Nigeria (FRN).
He is also praying for an order directing the Inspector General of Police (IGP) to prosecute the defendant for the offence of perjury and an order which the court may deem it fit.
Counsel to the CJN, Mr Sam Ologunorisa, SAN, informed the court that the plaintiff and his counsel were not in the court.
Ologunorisa told the court that it seems the plaintiff and his counsel were “running away” from the suit they filed, stressing that the court should do the needful in the interest of justice.
“We on our part filed a notice of preliminary objection, a counter affidavit and a written address. We urge the court to deem it fit that the originating summon has been argued.
“We have to look at exhibit III of the originating summon.
“We urge the court to dismiss the suit. The case is meant to scandalise the CJN,” he argued.
Ruling on the prayers, Justice Danlami Senchi of the court said that another opportunity would be given to the petitioner to appear in the court to prove the allegation.
Justice Senchi adjourned the case until Friday.
He ordered that hearing notices be served on the petitioner.
admin May 21, 2019
Next article Next Post
Previous article Previous Post
Click to comment
‹ Newer Post Older Post › Home
Subscribe to: Post Comments (Atom)