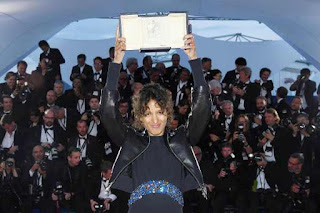 Mati Diop, French-Senegalese actress and director, is now the first black female director to win an award in Cannes Film Festival’s  72-year history.
Diop took home the Grand Prix , equivalent of a silver prize, for her film  ‘Atlantics’, a Senegalese drama about sexual politics among young migrants.
The Grand Prix award,  bestowed by the jury of the festival on one of the competing feature films, is the second-most prestigious prize of the festival after the Palme d’Or.
The 36-year-old however said she was a “little sad” to make history as the first woman of African descent to even have a film screened at the festival.
“My first feeling to be the first black female director was a little sadness that this only happened today in 2019.
”I knew it as I obviously don’t know any black women who came here before,and I knew it but it’s always a reminder that so much work needs to be done still,”she said.
South Korean director Bong Joon-ho also made history for clinching  the ‘Palme d’Or’, most prestigious award at Cannes.
The Palme d’Or was given to the filmmaker for his film ‘Parasite’  a dark comedy that explores the dynamics of social class.
Bong is the first Korean to win Cannes’ top prize, but received acclaim at the festival in 2017 for his film Okja.
NAN reports that the Cannes Film Festival is reputed to be one of world’s most prestigious film fiesta.
The 2019 edition held from May 14 to 25, with Nigeria and other African countries holding the Pavillon Afriques, a platform where filmmakers, investor and other stakeholders meet to discuss business of film making in the continent.
admin May 27, 2019
Next article Next Post
Previous article Previous Post
Click to comment
‹ Newer Post Older Post › Home
Subscribe to: Post Comments (Atom)