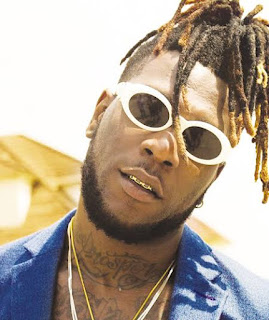 It is very  common for celebrities to be called out on social media every now and then and in recent times, one Nigerian celebrity that has been consisttenty called out is Burna Boy.
The reggae/dancehall music star has found himself under public scrutiny for some of his posts whom many of his followers find offensive because they believe he is throwing shade at fellow artists.

Burna Boy who recently pointed out that streaming numbers does not equate talent left fans wondering if he was throwing shade at Mayorkun who celebrated having over 70 million streams.

In the same vein, he also pointed out that artists signing international recording don’t know what they are getting into. This coincided with Tiwa Savage signing a deal with Universal Music Group and fans once again called out Burna Boy for being a killjoy.

Now in a move of his own, the “Dangote” crooner has announced to fans that he will be leaving social media permanently with all his social media accounts to be handled by his management. He also revealed that his social media platforms will now be used to promote his music concerts and song releases.


“I am leaving all social media platforms permanently. They are now strictly for my show dates and new music. My social media will now be in the full control of my management. Love and positivity to all.”

It would be recalled that prior to this, a Twitter user had called out the “On The Low” crooner by writing,

“Burna Boy is overrated. Burna Boy needs to blow. This was y’all in 2018. First he pisses on you all. Calls you “backward unprogressive fools. Then disrespects Tiwa and now Mayorkun. Man is clearly messed up. You people hyped a wall gecko, he started to think he’s a crocodile.”

In response, the multiple award winning-singer shared the below series of tweets.

“Lol. Nice comedy. But really If I wanted to call out someone. It won’t be on twitter or Instagram, I’m more of the real life type. I State Facts, I don’t expect people like you to understand cuZ I do not speak unless it’s the TRUTH and I know ur not used to that so I get it.”

“FYI Hype is NOT what got me here neither is is what will keep me here. Same ppl that hail you will tear you down so it never mAttered to me. I just do what’s true to me that’s all. “Overrate or Underrate” doesn’t change shit! Truth needs no validation from ignorance.”

“BTW anyone that thinks I just “Blew” last year. NewsFlash – I been HOT since 2012 NON STOP! Doing it ALL. Touring, getting Money, TREND setting, Big Billboards for ur favourite brands, Feeding as many as I can on the streets and ALL. E.T.C. – AFRICAN GIANT no be mouth.”
Source
admin May 15, 2019
Next article Next Post
Previous article Previous Post
Click to comment
‹ Newer Post Older Post › Home
Subscribe to: Post Comments (Atom)