Donald Trump Says There is No Plans To Send 120,000 Troops To Counter Iran Threat 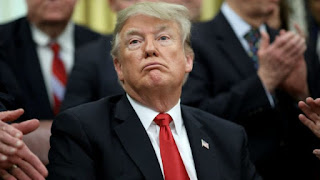 U.S. President Donald Trump dismissed as “fake news” a report in The New York Times that said the White House is reviewing plans to possibly deploy up to 120,000 troops to the Middle East should Iran attack U.S. forces or accelerate work on nuclear weapons.
“I think it’s fake news, OK? Now, would I do that? Absolutely. But we have not planned for that,” Trump told reporters on May 14 on the White House lawn.
“Hopefully, we’re not going to have to plan for that. And if we did that, we’d send a hell of a lot more troops than that,” he added.
Citing anonymous administration officials,The New York Times said on May 13 that acting Defense Secretary Patrick Shanahan presented the plans at a meeting of Trump’s top security aides last week.
Several plans were detailed and “the uppermost option called for deploying 120,000 troops, which would take weeks or months to complete,” according to The New York Times.
The report said the plans do not call for a land invasion of Iran.
Commenting on the report, Russian Foreign Minister Sergei Lavrov said at a joint news conference on May 14 with visiting U.S. State Secretary Mike Pompeo in the Black Sea resort of Sochi that he hoped it was “just baseless rumors.”
Amid growing concerns of a conflict between the United States and Iran, U.S. officials have told their European allies that its recent military buildup in the Persian Gulf region is a “defensive” move being made in response to multiple threats coming out of Iran.
Last week, Washington announced the deployment of an aircraft carrier battle group and a bomber task force to the Persian Gulf to counter what U.S. officials called “clear indications” of threats from Iran to U.S. interests or its allies in the region.
On May 14, Brian Hook, the U.S. special representative for Iran, told RFE/RL that Pompeo delivered that message to European leaders in Brussels on May 13 — adding that Washington is “just trying to restore deterrence.
“We’re not spoiling for a fight,” Hook told RFE/RL.
Pompeo, speaking alongside Russian Foreign Minister Sergei Lavrov in Sochi on May 14, said that “‘we fundamentally do not see a war with Iran.”
British Foreign Secretary Jeremy Hunt on May 13 said before meeting with Pompeo in Brussels that Britain, France, and Germany are “very worried about the risk of a conflict happening by accident with an escalation that is unintended really on either side.”
Tehran, meanwhile, said Washington was engaging in “psychological warfare.”
It also announced it was suspending some of its commitments under the 2015 nuclear agreement with world powers, under which Iran agreed to restrict its nuclear program in exchange for sanctions relief.
The United States a year ago withdrew from the deal and has since imposed increasingly strict sanctions on Tehran.
In pulling out of the accord, Trump said the terms were not tough enough to prevent Iran from developing nuclear weapons and did not address Iran’s missile program or Tehran’s alleged support for militants in the region.
Iran denies it supports insurgent activity and has said its nuclear program is strictly for civilian energy purposes.
Source
admin May 15, 2019
Next article Next Post
Previous article Previous Post
Click to comment
‹ Newer Post Older Post › Home
Subscribe to: Post Comments (Atom)