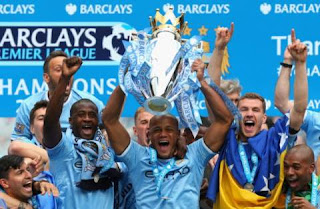 There are indications that English Premier League (EPL) champions Manchester City might lose their UEFA Champions League spot over alleged breach of Financial Fair Play (FFP).
With this development, Arsenal are likely be handed a Champions League lifeline if the ban finally comes from the Europe’s football governing body (UEFA).
According to UK Sun, the Etihad clubside are under probe by UEFA for providing “unconvincing” explanations over the club’s finances.
However, Arsenal are waiting to benefit from City’s setback as it offer another window for Unai Emery’s side to return to Europe, irrespective of finishing fifth at the end of the campaign.

Arsenal were banking on beating Chelsea in the Europa League final on May 29, as their only Champions League hopes after they missed out of a top four finish.
The Gunners had suffered three straight defeats in April – against Crystal Palace, Wolves and Leicester thereby ending the season on fifth spot one behind North London neighbours Tottenham, two behind London rivals Chelsea and four points ahead of sixth-place Man United.
Interestingly, City have been repeatedly linked with flaunting FFP, with “Football Leaks” document revealing series of allegations.
At the last count, UEFA are accusing Man City of “several alleged violations” of FFP regulations during its formal probe in March. Initial inquiries commenced last year after the Football Leaks reports.
Reports say Man City allegedly failed to disclose about £70m funds from owners Abu Dhabi United Group – the financial arm of the Emirate’s ruling family, declaring it was sponsorship income.
But Man City have condemned “the speculation resulting from the illegal hacking and out of context publication of City emails” and added: “The accusations of financial irregularities are entirely false.”
-NAN
admin May 15, 2019
Next article Next Post
Previous article Previous Post
Click to comment
‹ Newer Post Older Post › Home
Subscribe to: Post Comments (Atom)