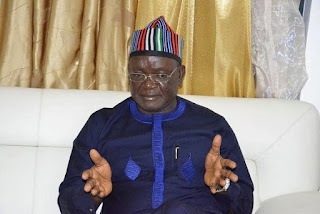 The Governor of Benue State, Samuel Ortom yesterday dissolved the Benue State Executive Council.
Ortom announced the resolution during the briefing Session of the State Executive Council meeting held at the EXCO Hall of the Benue Peoples House Makurdi, the state capital.
He used the occasion to appreciate members of the council for their stewardship in the last four years.
Ortom appreciated Council members for their commitment to duty and for supporting him during trying period that the state went through.
“Everything that has a beginning must have an end. It has been a challenging assignment but you supported me and the Deputy Governor to overcome the challenges”, he stated.
Governor Ortom prayed God to continue to strengthen them in their endeavours, expressing the hope that some of the outgoing council members might be reappointed in the new cabinet which is expected to be constituted in July.
Ortom said he enjoyed a cordial working relationship with Engr. Benson Abounu, stressing that he would still pick Abounu as Deputy if he had the opportunity to be Governor ten more times.
He also acknowledged what he described as selfless contributions and commitment of Secretary to the State Government, Professor Anthony Ijohor, SAN, Head of Service, Mrs. Veronica Onyeke and the Chief of Staff, Hon. Terwase Orbunde.
Deputy Governor, Engr Abounu said since the Governor nominated him to serve as his Deputy in 2014, they had not had a quarrel even once, expressing optimism that the same amicable relationship would be witnessed in the next four years.
He described Governor Ortom as a man of honour who has immense love for his people and maintains tremendous respect for friendship; an attribute he said was worthy of emulation.
Some Commissioners and Advisers from the three Senatorial Zones of the state who spoke on behalf of their colleagues thanked Governor Ortom for the opportunity given them to serve.
They described the Governor as a selfless leader who has uncommon passion for the interest of his people, and prayed God to continue to guide him as he begins another term in office this week.
admin May 28, 2019
Next article Next Post
Previous article Previous Post
Click to comment
‹ Newer Post Older Post › Home
Subscribe to: Post Comments (Atom)