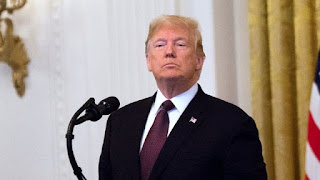 Amid the debates about impeaching the current US president over Special Counsel Robert Mueller’s probe, Pastor Robert Henderson, head of a ministry, has claimed that he interceded for Donald Trump before the courts of heaven.
In an interview with televangelist Jim Bakker, known not only for his preaching but for having a criminal record, Pastor Robert Henderson has predicted that those trying to remove Donald Trump from office will fail.
Henderson, promoting his book “Prayers and Declarations that Open the Courts of Heaven” on “The Jim Bakker Show”, insisted that people, opposing the incumbent president are fighting God as Trump is the Almighty’s pick.
“He’s God’s choice. They can try all day long to remove him, they will not remove him. God said, ‘I set him as the president,’ and they can fight, and they can curse, and they can do all that they want; the problem is that they’re fighting against God”, Henderson insisted.
According to the pastor, he had a dream about then-candidate Trump in March 2016. Trump is said to have asked Henderson to appeal for him in the courts of heaven to help his campaign and ensure his victory.
The preacher, who runs Robert Henderson Ministries, exchanging prayers for donations, claimed that he agreed and they appeared in what he described as “the council of the Lord”.
He insisted that God had instructed him to make a decree out of the Bible verse James 1:11: “All flesh is as grass, and flower is as the glory of the grass.”
“I want you to decree that Hillary Clinton’s campaign is as grass and that she is as the flower of the grass, and the burning, searing, exposing heat of God will come and bring exposure, and she will wither away and Donald Trump will be the president of the US”, the pastor recalled God’s alleged instructions from his dream.
His revelations emerged online just a day before Special Counsel Robert Mueller made his first public statement after a 22-month-long investigation, dubbed the Russian probe.
Mueller reiterated his position that his team didn’t determine whether Trump had obstructed justice or not, refusing once again to either exonerate him or accuse him of a crime.
He also confirmed that there were “systematic efforts” to interfere in the US presidential election in 2016, but cited the report’s findings, saying that the investigation hadn’t found any evidence of a “broader conspiracy” involving Trump.
Source
admin May 30, 2019
Next article Next Post
Previous article Previous Post
Click to comment
‹ Newer Post Older Post › Home
Subscribe to: Post Comments (Atom)