-->
Home Foreign News U.S. is at the risk of recession as trade tensions heightens

U.S. is at the risk of recession as trade tensions heightens 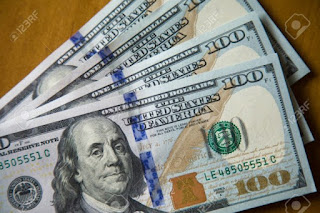 U.S.-China trade war has boosted the risk of a U.S. recession, say a strong majority of economists polled by Reuters, who now put the chances of that happening in the next two years at 40 per cent.
That is up from a median 35% in last month’s poll, the first time it had dipped slightly from where it held since December last year, before a crushing sell-off on Wall Street as 2018 came to a close, in part because of those worries.
U.S. President Donald Trump has dismissed the ongoing trade war with China as a “little squabble,” but there are clear signs of the conflict already having an impact on the economy, and the stock market has become jittery again.
“I have a hard time thinking of a scenario in which a further escalation of the trade tension we currently have would not make recession risk higher,” said Michael Hanson, head of global macro strategy at TD Securities.
“We are already in a situation where the level of tariffs that are either imposed or threatened to be imposed over the next several weeks are really quite high … and a move to basically putting tariffs of 25% on everything we import from China is a very real drag in the economy,” said Hanson.
While only a single-digit percentage of respondents say a U.S. recession is likely in the coming year, more than one-quarter of economists polled see a greater than 50% probability of recession within two years.
The most pessimistic call for the probability of a recession in one year also has crept up, from 60% to 70%.
The U.S. economy is forecast to have already lost considerable momentum, slowing to 2.0% in the current quarter from 3.2% in the first three months of the year, according to median forecasts from the latest monthly poll of 120 economists.
That forecast for April-June is a sharp downgrade from 2.5% in last month’s poll, owing in part to the unexpectedly strong figure reported for January-March. Growth is forecast to slow to 1.8%, below trend, by the fourth quarter of 2020.
The impact of the trade war is already being felt on the economy, with retail giants like Walmart Inc warning shoppers that prices will rise due to higher tariffs on Chinese imports.
Nearly 75% of economists, or 52 of 70, who answered an additional question on what the U.S.-China trade war developments this month had done to the risks of a U.S. recession said they had increased.
China is trying to steer its economy away from exporting cheap goods and more toward domestic consumption. But the United States, already a very consumer-reliant economy, imports hundreds of billions of dollars worth of goods from China, which the Trump administration is hitting with tariffs.
Very few economists believe this will do anything but damage the economy.
“There actually seems to be a belief in the White House that trade wars are both good and winnable. Delusion creates massive risks,” said Joel Naroff, chief economist at Naroff Economic Advisors in Holland, Pennsylvania.
With trade uncertainty abounding and increased chances of recession, the Federal Reserve is expected to hold rates at their current 2.25-2.50% until the end of next year at least.
But over half of the smaller set of economists who answered another additional question said the Fed is likely to cut rates before end-2020. Among those respondents, more than 80 percent expect a rate cut to be the central bank’s next policy move.
Although Fed officials had previously played down the trade war’s likely impact on the U.S. economy, they emphasized on Monday a protracted tit-for-tat battle was a different matter that might require a Fed response.
While interest rate futures are pricing in a cut as soon as October, the Reuters poll results are the latest evidence to suggest that the global policy rate cycle following the Great Recession over a decade ago is over.
Underlining a weak demand outlook, forecasts for core PCE, the Fed’s preferred inflation gauge, were cut to average 1.7% from 1.9% this year and to 2.0% from 2.1% in 2020.
Source
admin May 16, 2019
Next article Next Post
Previous article Previous Post
Click to comment
‹ Newer Post Older Post › Home
Subscribe to: Post Comments (Atom)