FIFA President, Gianni Infantino Gets Re-Elected For a Second Tenure 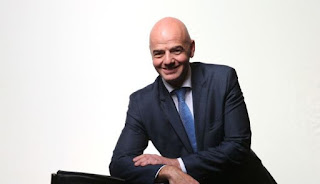 Gianni Infantino was re-electedWednesday by acclamation for a second term as FIFA president at the Congress of world football’s governing body in Paris.

The 49-year-old, who took charge of FIFA in February 2016 after the departure of the disgraced Sepp Blatter, stood unopposed for a new four-year term which will run until 2023.
Earlier, Infantino had insisted that FIFA had been transformed into an organisation “synonymous with credibility” as he addressed representatives of the 211 member federations, before the Women’s World Cup begins in the French capital on Friday.
“Today nobody talks about crises, nobody talks about rebuilding FIFA from scratch, nobody talks about scandals, nobody talks about corruption, we talk about football,” insisted the Swiss-Italian lawyer, formerly secretary general of UEFA.
“The very least we can say is that we have turned the situation around.
“In three years and four months, this organisation went from being toxic, almost criminal, to being what it should be, an organisation that develops football, an organisation that cares about football.”
Check
admin June 05, 2019
Next article Next Post
Previous article Previous Post
Click to comment
‹ Newer Post Older Post › Home
Subscribe to: Post Comments (Atom)