Trump wears new look As He pays Visit to UK 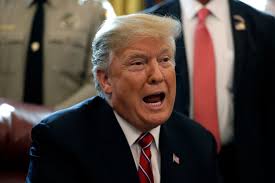 US President Donald Trump has shown off a new hairdo ahead of his visit to the United Kingdom.
Attending a service at a Virginia church on Sunday ahead of a golf outing, Trump appeared to have traded his distinctive swirled blonde mop for a slicked-back hairstyle.
He did not make any remarks during the worship service, which took place in the wake of a fatal shooting, but mouthed “thank you” as he walked back off stage.
Twitter, however, has been abuzz with talk about his new look, with commenters poking fun at the US leader.
One user described Trump as a “greasy version of Steve Bannon”, while another compared him to Steve Carell’s fictional character from The Office.
Source
admin June 03, 2019
Next article Next Post
Previous article Previous Post
Click to comment
‹ Newer Post Older Post › Home
Subscribe to: Post Comments (Atom)